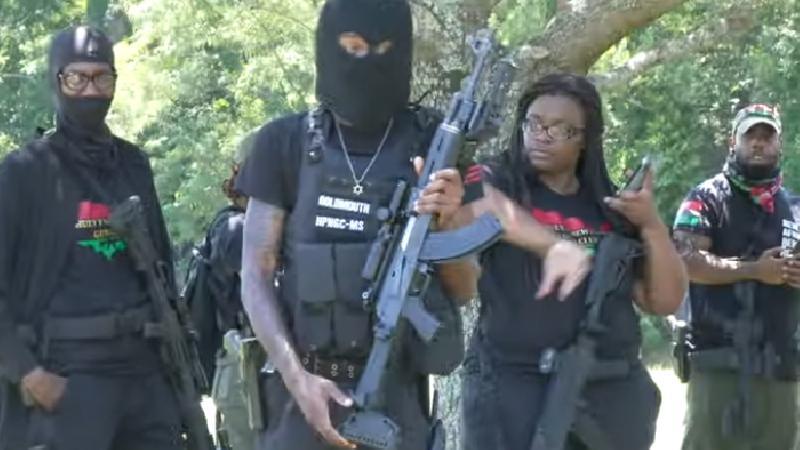 “If people aren’t going to do their job, then we’re here to do it for them,” said Nick Bezzel, of the Elmer Geronimo Pratt Pistol & Rifle Gun Club, after being told for the second time today that officials in Brookhaven, Mississippi wouldn’t meet with him and other armed black activists.

Bezzel was with a group of demonstrators, including Black Panthers, who were upset over a case involving a 24-year-old Federal Express driver named D’Monterrio Gibson. On January 24th earlier this year, Gibson was shot at by a man named Brandon Case and his father, Gregory Case, while attempting to make deliveries.

The two Cases were eventually charged with assault, but bonded out quickly. Gibson and the accompanying group wanted elevated charges, for instance attempted murder or a hate crime. Ford Fischer’s News2Share cameras captured the scenes of activists being told a planned meeting with a District Attorney was called off, and being thrown out of the area by the Brookhaven police chief just as they were leaving.

Two days later, a coalition of black pro-gun groups, including Black Panthers, the Black Riders Liberation Party, the aforementioned Elmer “Geronimo” Pratt Gun Club, Sisters of the Underground, the Huey P. Newton Gun Club, the Black Power Militia, the Black Power Coalition, and others, gathered on Juneteenth in Natchez, Mississippi at the site of the “Devil’s Punchbowl,” where some historians say up to 20,000 black people died during and after the Civil War.

News2Share captured those scenes as well, which included a collective signing of a “Declaration of the Regulated United Black Militia.” Some protesters brandished a placard with a “Declaration of Self-Determination by Black Peoples and Organizations,” while others replaced “Hands up, don’t shoot!” with a new chant: “Guns up! Shoot back!” Other chants included:

Black people in America ain’t taking it no more, is that right? That’s right!

We believe in an eye for an eye, a tooth for a tooth, a limb for a limb, and a life for a goddamn life!

These are different times… Guns up, shoot back! I said, goddamnit, black power!

Despite the obvious newsworthiness of these several militias from around the country gathering to sign a “Declaration of the Regulated United Black Militia,” no other media covered the event.

There are a lot of taboos on commercial television, which for instance doesn’t like to show scenes of poverty (unless it’s being chased by police), rarely interviews non-voters, almost never does military contracting fraud stories, and seldom shows results on the ground of American military/drone strikes, even if they’ve already appeared on the airwaves of other countries.

Perhaps the most dependable taboo in American media, however, involves black Second Amendment advocates. As Ford and News2Share have documented over the years, there are many such groups, and they sometimes march in conjunction with groups like the Boogaloo Boys. In fact, the biggest taboo of all might be showing such groups demonstrating together:

Today armed Black Lives Matter and "boogaloo" protesters joined forces for an open carry rally against police violence and government overreach. I'll have HD video up ASAP, but here are some photos I snapped today.

Whatever your feelings about guns — I personally am not a fan — the psychology of the contrasting coverage of pro-gun demonstrations is fascinating. News audiences are clearly meant to associate white pro-gun protesters with a dangerous and probably organized national race-hatred movement, while black pro-gun protesters either don’t exist or are a fringe movement not worth covering. Under no circumstance must such groups be shown together, even when they organize co-demonstrations. The first installment of Activism, Uncensored from last June, for instance, showed such a joint demonstration in Virginia Beach:

It’s often hard to gauge whether certain movements are gaining or losing strength nationally, or are simply organizing more effectively thanks to the Internet. However, it’s clear the national press doesn’t have a settled-upon strategy for covering armed black protesters. Most commonly they appear in reflection, shown as an exaggerated phantom of conservative news coverage, with the New York Times blasting Fox News for over-depicting “fringe hate groups” during the Obama years a classic example. These groups do exist, however, and their shows of strength in places like Natchez are clearly newsworthy. What’s behind the taboo?