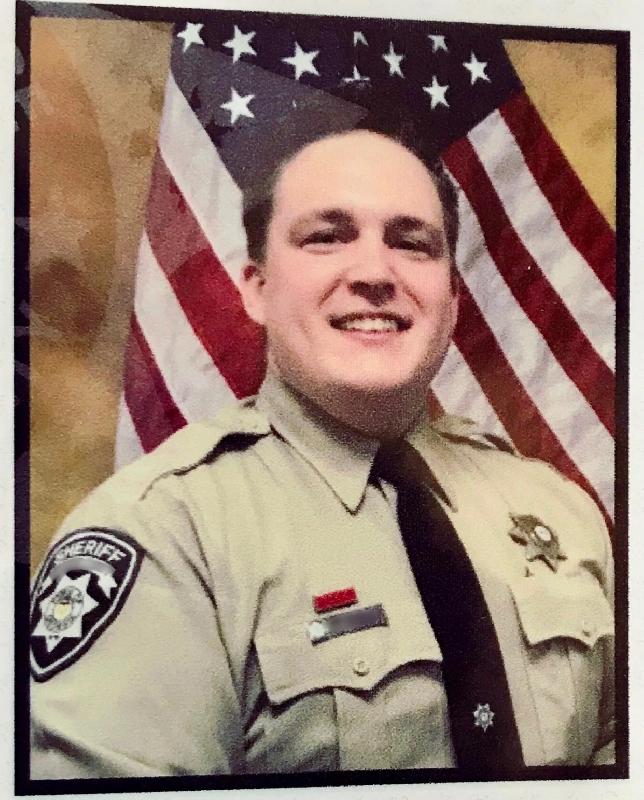 A sheriff's deputy turned political prisoner was maced in the face in the DC Gulag yesterday for removing his face mask to take his medication.

The Tennessee man was then left in a cell covered in the spray for over eight hours of torture, unable to de-contaminate and rinse off his burning skin.

Ronald Colton McAbee was a Sheriff's Deputy and the only police officer who attempted to try to save the life of Rosanne Boyland on the West Capitol Steps.

Ronald Colton McAbee was employed by the Williamson County Sheriff's Office in Tennessee before he became a political prisoner of the Biden Regime.

He has been detained for over a year as he awaits trial with a date set for September of 2023. The Tennessee Sheriff's Deputy McAbee desperately works on the body of fellow protestor Rosanne Boyland after she was gassed and seen beaten by Police Officer Lila Morris. Boyland died.

According to multiple witnesses in the Gulag, McAbee was assaulted by Lieutenant Crystal Lancaster, a guard in the prison with an alleged past of mistreating January 6th defendants. *Please see information on how to report Lt. Lancaster to the US Marshalls below.

Here is a heartbreaking account from another J6 prisoner who witnessed the assault:

Two good men, Ronald McAbee and Ronald Sandlin have been pepper sprayed and assaulted and taken to the hole. Mr. McAbee was attempting to get his morning medication when one Lt. Lancaster assaulted him and sprayed him with OC spray. This is the type of thing we are used to here in C2B of the DC Gulag. Staff assaults. Violence under color of authority. We are considered and called insurrectionists by the staff here. One thing is for certain- they will be back. It is getting to the point where they are going to push too far. We need prayers for the men in the hole, for their families. For a quick end to this persecution of the American people. We are alone, a thousand miles from home and all we have is each other. We are willing to fight. #justice 4J6 Ronald McAbee and his wife Sarah before his unconstitutional detainment at DC Gitmo. They have not seen each other in over a year.

See this screenshot from another J6 prisoner: According to yet another political prisoner and witness:

We are currently on lockdown. Today has been another day of physical abuse and violence toward us in here. This time Lt. Lancaster shoved Ronald McAbee and then maced him in the face for only attempting to get his morning meds at roughly 11:45am from the nurse without wearing a mask.

McAbee was taking medication and then walking back to his cell when Lt. Lancaster assaulted him for not wearing a mask! Then she kept spraying him in the face and people in here were yelling at her to stop! She sprayed him a second time while he was being cuffed.

He was nonviolent and not combative. Lt. Lancaster gave him no warning and never called for assistance as she is mandated to do before she sprayed him with the "dangerous/deadly" weapon so many Jan 6ers are charged with.

After that happened she called over the radio for assistance which created a flood of Officers coming through the door. They quickly arrested 3 other men along with McAbee.

All over him not having a mask on.

"Although the Biden Regime has put mask mandates on hold until after the November election, the DC Gulag is still torturing the January 6th political prisoners with these unconstitutional mandates," said Tina Ryan of Citizens Against Political Persecution.

According to the J6 prisoners, they have to wear masks at all times unless they are eating and drinking. Even then, they have to pull the mask down to take a sip or bite, then put it back up or face being maced and thrown into the hole. Advocates say January 6th defendant Brian Mock was thrown into the hole for months after a similar mask and mace incident in the Gulag this past Veteran's day. According to the other prisoners, McAbee and three other prisoners were taken to the hole and other segregated locations in the jail after the incident yesterday. They said McAbee was relocated to a cell with a very limited view of the surveillance camera, and they fear he will be beaten to a pulp behind closed doors the way J6 prisoner Ryan Samsel was last year. Samsel is a January 6th prisoner that was allegedly blinded in one eye after a brutal beating by guards.

See another account sent to us by a prisoner: According to prisoners, Lt. Lancaster has been taken off duty from the January 6th unit by the US Marshals because of her prior encounters with J6ers. Many prisoners say Lt. Lancaster and other guards are unable to see past political differences when it comes to dealing with prisoners.

"They hate us," said former J6 Brian Mock. "They believe all the media hype and have branded us as racist extremists. They guards told everybody in general population, over a hundred people of, that I was a racist. It puts us in incredible harm."

Because the January 6th prisoners are pre-trail detainees, they are technically in the care of the US Marshal Service, not the DC Department of Corrections. Guards can ultimately be held accountable by the Marshals. (We at the Gateway Pundit have had mixed success dealing with these Marshals, as some are good people and others completely uninterested in helping out.) *Please scroll down to see how you can help by contacting the US Marshals.

According to the Department of Injustice and the leftest viewpoint of January 6th, pepper or OC spray is a deadly of dangerous weapon only when being carried by a Trump supporter. Many men literally face years in prison and are being charged with "assault with a deadly weapon" for carrying pepper spray! Yet this same weapon (in an even more potent form) is called "non-lethal force" and "safe" at DC Gitmo where prisoners are maced for not wearing face masks! Talk about a double standard.

Prisoners like McAbee continue to be the unlucky fall guys that the government destroys in their diabolical quest to keep President Trump from re-taking power in 2024. According to his fellow prisoners, McAbee is a kind soul with a big heart that goes out of his way to help others in harm's way- like fellow protester Rosanne Boyland.

Ironically, although McAbee was off duty on the day of January 6th, the sheriff's deputy from Tennessee seemed to be one of the very few members of law enforcement that did their job properly on January 6th s he stood up for fellow protestors in danger.

"McAbee is a hero," said Ryan. "He tried to save Boyland's life after the DC Metro Police beat her and Capitol Police gassed her. They refused to help her and McAbee, an off duty cop, did. He now languished in the Gulag over a year and a half later."

McAbee was one of the men desperately trying to save the life of Rosanne Boyland, who died after she was seen being beaten by DC Metro Police Officer Lila Morris. Please see the video of McAbee below desperately attempting to give CPR to the unconscious woman and begging police to help her. He is in the red hat and red gaiter with the word "Sheriff" on his jacket:

We at the Gateway Pundit are working on a video that will completely exonerate McAbee from the charges that the Biden Regime have levied against him- including assaulting police officers. Our video will in fact show without a shadow of doubt that McAbee was ASSISTING OFFICERS and protecting them, yet is rotting away in prison. *We will post this video as soon as it is ready.

The OC sprays being used against the prisoners are reportedly more painful than bear spray. They have been used liberally to punish J6 prisoners by guards, even though the DC Marshals office has directed guards to not spray prisoners that are "non-combative", such as McAbee.

These rules simply do not seem to apply to Trump supporters or January 6th detainees. Please take the time to reach out to the Marshall's service on behalf of Ronald McAbee and ask them to look into the conduct of Lt. Lancaster.

Here is another prisoner's plea for help calling the US Marshal: