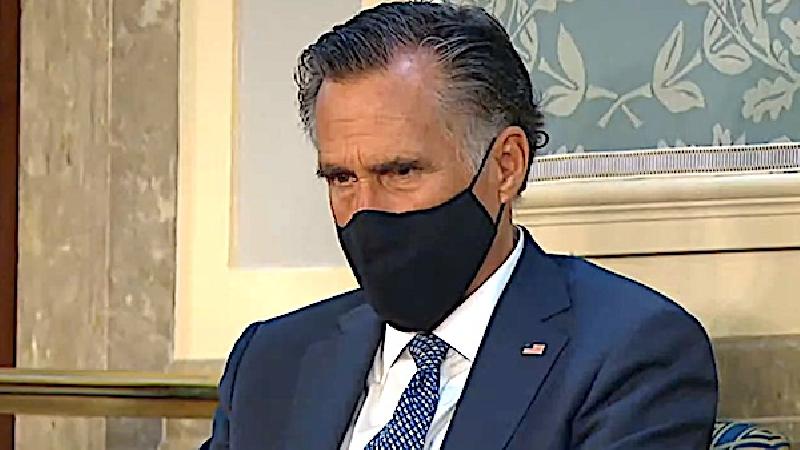 An op-ed in the Atlantic, penned by Sen. Mitt Romney (R-UT), blasts both sides of the political spectrum arguing that America is missing the bigger picture.

“What accounts for the blithe dismissal of potentially cataclysmic threats?” questions Romney in the piece titled, “America Is in Denial.”

The senator, who was the 2012 Republican nominee for president, has gained attention in recent years for his criticisms of former President Donald Trump, including a vote to convict Trump in 2020 following the riots of January 6th.

Romney’s piece, however, was less focused on Trump and more concerned with the divisions within American domestic politics.

“The left thinks the right is at fault for ignoring climate change and the attacks on our political system,” wrote the Senator continuing, “The right thinks the left is the problem for ignoring illegal immigration and the national debt.”

Romney argued that regardless of political affiliation, the entire country is “in denial.”

The Senator is essentially calling for Americans to open their eyes to the true problems that face our nation arguing that “when entire countries fail to confront serious challenges, it doesn’t end well.”

Romney claims that Americans have been viewing the world through “rose-colored glasses,” with “limited consequences,” for their actions.

“If we continue to ignore the real threats we face, America will inevitably suffer serious consequences,” wrote Romney.

The Senator then discussed President Joe Biden, who he argues “is a genuinely good man,” but has not yet been able to “break through our national malady of denial, deceit, and distrust.”

Romney also examines the other side saying that “a return of Donald Trump would feed the sickness, probably rendering it incurable.”

Romney has come under fire by Trump-aligned Republicans who claim that the Senator is an enemy to the former president, after voting to impeach him twice.

This comes as the New York Times reported earlier this week that Trump is looking to announce his presidential run in 2024 earlier than usual. Meanwhile, according to a Harvard-Harris poll, 61% of Americans believe Trump should not run for president again.

Romney continued that “Congress is particularly disappointing,” arguing that lawmakers infrequently display a backbone against wrongdoing. “Too often, Washington demonstrates the maxim that for evil to thrive only requires good men to do nothing,” wrote the Senator.

“I hope for a president who can rise above the din to unite us behind the truth,” said Romney.