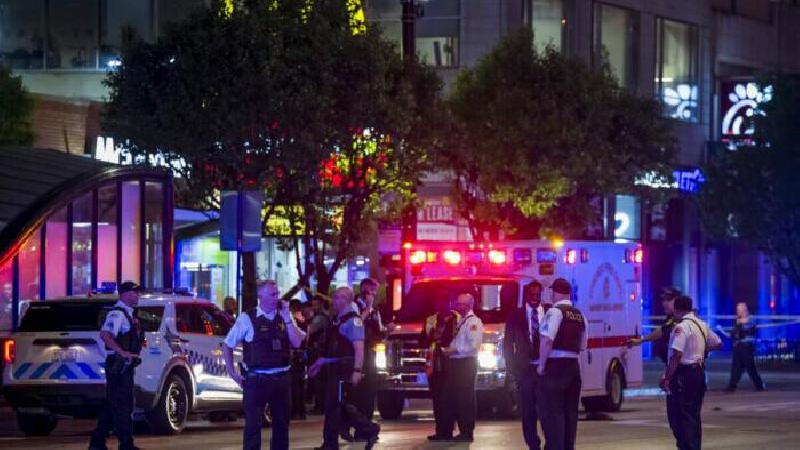 At least seven people were killed and 29 more were injured in shootings across Chicago over the Fourth of July weekend, officials said on Sunday morning.

Authorities said that a male and another male were shooting at each other at the 2200 block of South Wentworth Avenue at around 10:50 p.m. A 24-year-old unidentified woman was shot in the torso and was later pronounced dead at Stroger Hospital, officials told the Chicago Sun-Times and ABC7.

The incident left a 42-year-old injured, and an official said she’s in good condition at a nearby hospital, the paper reported. One of the suspects, a 38-year-old male, was shot in the buttocks and is in critical condition in Northwestern Memorial Hospital, authorities said.

Early on Sunday, a 35-year-old male was shot dead at around 3 a.m. while in a vehicle in Brighton Park, officials said. The male was in the passenger seat as a female driver was driving a car on the 3800 block of South Kedzie Avenue when he was hit in the neck by gunfire.

And on Friday, authorities said a 26-year-old male was shot and killed in the South Side’s Englewood district. The male was outside about 5:45 p.m. in the 6500 block of South Wolcott Avenue when someone approached and shot him.

On Sunday, two people were injured and one person—a 24-year-old male—died in a shooting at Grand Crossing on the South Side, police said. They were shot in the backyard of a house in the 7000 block of South Harper Avenue at around 5:30 a.m. local time.

Police said that in another incident, a 29-year-old male, identified as Keishone Roberts, was shot dead in the 4300 block of West Van Buren Street in West Garfield Park, the paper reported. He was shot several times after someone approached him and opened fire. He was pronounced dead at Stroger Hospital sometime later.

Around midnight Saturday, a 30-year-old male was shot and killed in the 9000 block of South Escanaba Avenue when someone shot him in the head, police said. Other details about the incident weren’t provided.

Authorities also confirmed that a man was shot and killed while riding a bike in the 2100 block of East 71st Street at around 4 p.m. Saturday. The man, 26, was struck in the head and arm before he was taken to a nearby hospital and was later pronounced dead.

During the Fourth of July weekend in 2021, more than 100 people were shot, of which 19 died. That prompted Chicago Police Chief David Brown to say that residents should expect more officers on the streets this weekend.

“While I won’t give a number, we do have adequate resources … where we need them,” Brown said last week, according to reports. “Navy Pier obviously is a focus. All of our high-violence areas—obviously the top 55 beats—are a focus. As well as areas within every neighborhood” and “downtown.”

And last week, officials said that a 19-year-old male suspect, Anthony Heredia, was charged in the fatal shooting of a 17-year-old girl in a Chicago parking lot of a business. Police told Fox32 that the girl approached Heredia who produced a gun and fired shots at her.