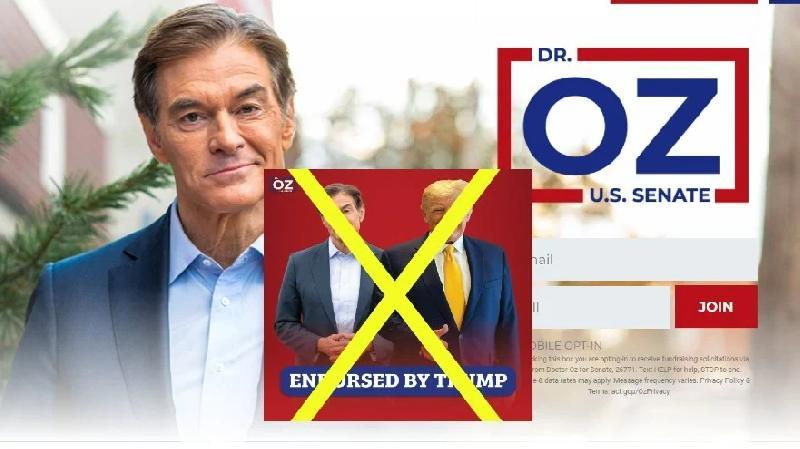 Dr. Mehmet Oz, the television celebrity and Republican nominee for U.S. Senate in Pennsylvania, had dropped former President Trump from his campaign content as the hotly contested Senate election enters the final stretch of the midterm cycle.

Trump was a central figure of Oz’s initial campaign, frequently appearing in his ads before any endorsement by Trump. Then, in mid-April, Trump offered an official endorsement of the television host turned politician.

In April, Trump became a constant fixture in Oz’s campaign ads. Trump was featured in a series of six-second issue ads on guns, abortion, and energy. Oz’s ads all carried the same “endorsed by President Trump” banner to grab voters’ attention.

Even the Dr.’s Twitter account mentioned Trump more than 70 times from April 9 until the primary day on May 17.

But, it appears Oz has decided to depart from utilizing the endorsement and is cutting all mention of Trump from his campaign.

The ad that followed Oz’s win in the bid for the Republican nomination didn’t mention or include footage of Trump.

His banners across multiple platforms now say “Thank you, Pennsylvania,” and feature a photo of him without Trump.

Oz’s Twitter bio no longer advertises him as the “Trump Endorsed Candidate for U.S. Senate,” and he hasn’t tweeted about Trump since May 17.

On his profile on Trump’s Truth Social, he still mentions the endorsement, but the candidate has not posted or shared any related content since winning the primary.

While no surprise to many, the change comes at the height of the January 6 hearings, and as Oz has continued to signal support for many ideals that do not align with the America First policies. The move prompted radio host Kimberly Klacik to call Oz and “Snake.”