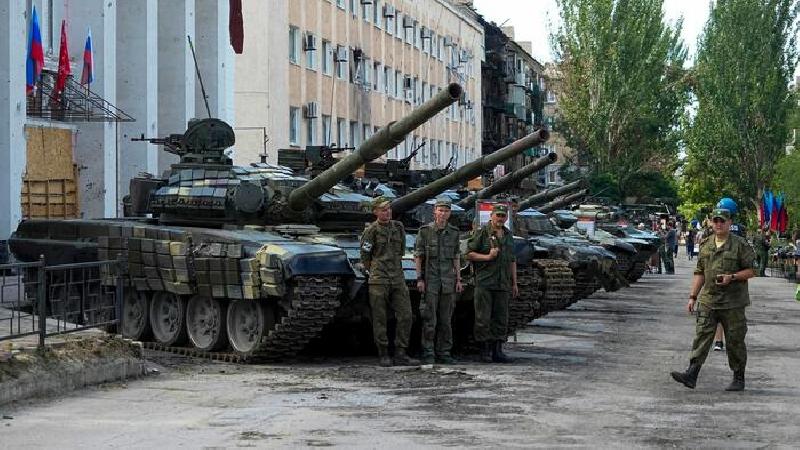 Corporate media are ignoring the stark implications of Russia’s stated intention to take control of more Ukrainian territory than just Donetsk and Luhansk. I discussed this on The Critical Hour yesterday and supplement those thoughts in the paragraphs below.

On Wednesday, Russian Foreign Minister Sergey Lavrov announced Moscow’s broadened aims, explaining, "Now the geography is different. It’s far from being only the Donetsk and Luhansk People’s Republics, it’s also Kherson and Zaporizhia Oblasts and a number of other territories."

In his interview, Lavrov pointed specifically to HIMARS (High Mobility Artillery Rocket Systems, made by Lockheed-Martin) as the kind of "weapon that will pose a direct threat to our territory and the territories of those republics who have declared their independence (Donetsk and Luhansk)." The HIMARS being provided to Ukraine have a range of 50 miles, putting them also at easy reach of Crimea – which Kyiv (and the U.S.) insist is legally still part of Ukraine. It all depends on "geography."

I’ll See You and Raise You

Just a few hours after the Lavrov interview was reported came the announcement by US Defense Secretary Lloyd Austin that the US will give Ukraine four more HIMARS, bringing the total to 16. Austin bragged that HIMARS have already "made a difference on the battlefield."

But which battlefield? Lavrov and Russian President Putin can have no illusions that the wider, strategic "battlefield" includes Russia. Indeed, this is the same benighted Lloyd Austin who let that cat out of the bag three months ago:

"One of the US’s goals in Ukraine is to see a weakened Russia. … The US is ready to move heaven and earth to help Ukraine win the war against Russia."

Will Blinken and Biden Wake Up?

It seems a sure thing that Biden’s advisers anticipate being engaged in a proxy war in Ukraine at least until this November when the US mid-term elections take place. Until then the Democrats surely will not want to appear to be slackers in confronting Russia on this critical issue (which, truth be told, they themselves did so much to create).

The reality, of course, is that US policy makers go blithely along, enriching the MICIMATT (and enhancing campaign coffers) by giving advanced weaponry to Ukraine – and replacing them as needed. It’s very good for the multifaceted profiteering business. What is really troublesome is that there appears to be little understanding of the high stakes involved; little appreciation of what it means that Russia considers US/NATO behavior in Ukraine an existential threat – one that Russia is determined to remove, and can.

As fall approaches and more HIMARS arrive, their 50-mile range and (as Lavrov tried to explain) the dictates of “geography” may lead to a much deeper Russian offensive well beyond the Donbass. Military prospects for Washington’s proxies in Ukraine are already poor and are likely to grow worse as the mid-terms grow near. Understandably, Putin will be worried that the US will move: "I’ll see you and raise you."

President Putin is no stranger to the reality that US presidents are beset by domestic political pressures. In June 2021, he acknowledged this specifically in a keynote speech to the St. Petersburg International Economic Forum:

"I am sure that it [US policy towards Russia] is primarily impacted by domestic political processes. Russia-US relations have to a certain extent become hostage to the internal political processes that are taking place in the United States."

In my view, this gives the Kremlin considerable incentive to defeat what’s left of the Ukrainian army and move west, taking control of Odessa and moving toward Moldova, in due course. Again, Putin would fully expect the Biden administration to raise the ante at that point. So, by October things could get quite dangerous quite quickly.

Media Consumers in for Shock?

Given the Walter-Mitty-type reporting on how well Kyiv’s forces are doing, and the overall absence of balanced reporting and commentary in Establishment media, future Russian army advances beyond the Donbass are likely to come as a shock. Factor in the 6-year-long indoctrination/brainwashing on Russia’s "interference" in elections and its other alleged Russia-gate misdeeds (now disproven, but with the truth still hidden). Salt with a dollop of Russophobia and continual one-side-of-the-story reporting, and US media consumers would probably be malleable enough to support giving Ukraine even longer-range weapons systems and/or aircraft.

Surprise, surprise: This week the New York Times failed to put 1 and 1 together, so to speak: (1) Lavrov on "geography" and HIMARS prompting Russia to go deeper into Ukraine; and (1) and Austin’s pledge of four more HIMARS to make "a difference on the battlefield."

Instead, NYT readers on Friday got front-page, above-the-fold, he-said-she-said drivel from Andrew E. Kramer in Kyiv; his piece is titled To Rally Allies, Ukraine points to Fresh Gains.

"Through it all, the Ukrainians’ message to the world did not change. We can win. Our strategy is working, if slowly. Just keep the weapons coming."

Among the successes the Ukrainians have told Kramer about is a strike on a Russian ammunition depot with, you guessed it, HIMARS. And, scraping the very bottom of the barrel, Kramer reports that the head of Britain’s MI6 (the UK counterpart to the CIA) believes Russian forces "are about to run out of steam … giving Ukrainians opportunities to strike back." To remind (because Kramer forgot to), MI6 has a well deserved reputation for "fixing the intelligence and facts around the policy," as official British documents show it did before the US/UK attack on Iraq in March 2003.

One must skim half-way through Kramer’s 38-paragraph article to find a sensible paragraph on what really matters. But he does hit paydirt with this one:

"The question of whether the long-range weaponry now arriving in Ukraine can indeed roll back the Russian army has become a pivotal unknown in the war."

Agreed: the answer to that cannot be known now with certainty. But the risk of tit-for-tat escalation getting out of hand, as early as this fall, can be known. A pity that NY Times readers are not warned of that.