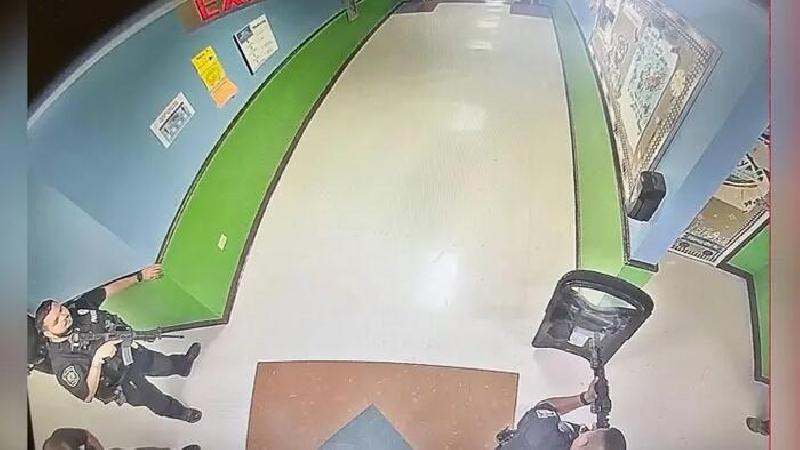 The first images from inside the Uvalde school shooting have emerged, revealing that police were heavily armed with rifles and a ballistic shield, yet still waited another 58 minutes while gunman Salvador Ramos continued his rampage - leaving 19 students and two teachers dead.

The photo, obtained by the Austin American Statesman and KVUE on Monday, casts an even more damning shadow on the Uvalde police department's response to the May 24 mass shooting at Robb Elementary School.

Despite entering the school just nine minutes after Ramos, officers waited nearly an hour to advance despite their superior firepower and training. Eventually, at 12:50 p.m. a Border Patrol BORTAC agent ignored police orders and burst into the classroom, shooting and killing Ramos.

"There were 19 officers in there," said Col. Steven McCraw, director of the Texas Department of Public Safety, at a media briefing days after the shooting (per the NY Post), "In fact, there were plenty of officers to do whatever needed to be done, with one exception — the incident commander inside believed they needed more equipment and more officers to do a tactical breach at that point."

These fucking cops were such cowards that one literally just sat outside the class while his wife was literally dying on the phone with him and...he just fucking sat there. https://t.co/sQX3YcBbFM pic.twitter.com/TTmdV5ZpRt

The pictures are undoubtedly one of the reasons the City of Uvalde and the police department hired a private law firm to prevent the release of basically all records pertaining to the mass shooting.

"The City has not voluntarily released any information to a member of the public," said city's new lawyer, Cynthia Trevino, of the law firm Denton Navarro Rocha Bernal & Zech, in a letter to Texas AG Ken Paxton seeking a determination about what information they were required to release to the public.

Paxton's office will eventually rule which of the city's arguments have merit and will determine which, if any, public records it is required to release.

According to the report, Uvalde has received 148 separate public records requests (including several from VICE), and has lumped them all together in order to make a legal argument as to why it shouldn't have to respond to many of them.

Earlier last week, the Texas Department of Public Safety asked Paxton if they could suppress body-camera footage because it could expose "weaknesses" in their training that criminals could exploit.

Uvalde and the police department have argued that they should also be exempt from releasing "police officer training guides, policy and procedure manuals, shift change schedules, security details, and blueprints of secured facilities," since they could be used to decipher "methods, techniques, and strategies for preventing and predicting crime."

The letter also argues that bodycam footage could be "information considered to be confidential by law, either constitutional, statutory, or by judicial decision."

In other words - the cops didn't follow their training, and through cowardice or bad orders, failed to stop a deadly mass shooting while restraining parents from rushing in and saving their own children.