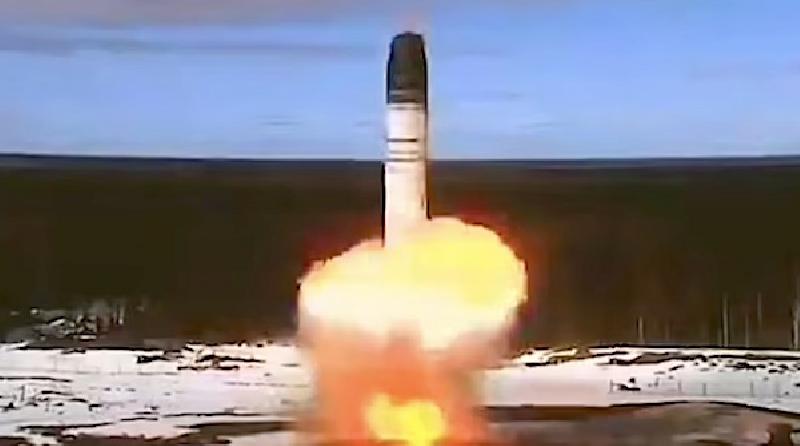 Russia has used the “Satan” name for a type of its missiles for years, running through probably six generations already.

Now President Vladimir Putin says the newest edition, a 16,000-mph vehicle capable of carrying up to 12 or 15 nuclear warheads, has been test-fired.

He said it’s a warning to anyone who “threatens” Russia and should give “food for thought” to his nation’s opponents.

The Sun reported the weapon can fly 11,000 miles, carry 15 warheads and could destroy a region the size of France.

It reportedly traveled the length of Russia, about 3,600 miles, in only about 15 minutes.

It ended up on the Kamchatka Peninsula, in the Kura Missile Test Range, Russian sources said in the Sun report.

“Most worryingly, the separate warheads in the Satan 2 missile are capable of detaching from the main 100-ton missile before traveling towards their target at hypersonic speeds,” the report said.

The Daily Mail said the test launch was of Russia’s “next-generation” missile that Putin already has called “invincible.”

The report explained Russian officials believe the missile could destroy the U.K. or hit any target on Earth.

The report also held a warning for the rest of the world: “The launch comes as a growing number of senior Kremlin insiders are said to be fearing the Russian strongman could resort to using nuclear weapons as Moscow’s position worsens.”

So far, Moscow’s losses in the war with Ukraine are estimated to have reached nearly 21,000.

“The insiders warned Russia will be left with a crippled economy and limited global influence. They also voiced fears that Putin could turn to the drastic measure of using nuclear weapons against his enemies if his invasion of Ukraine fails,” the report explained.

Putin took time to boast about it, saying, “The new complex has the highest tactical and technical characteristics and is capable of overcoming all modern means of anti-missile defense. It has no analogues in the world and won’t have for a long time to come.”

During a recent interview, Russian Foreign Minister Sergei Lavrov, a Putin ally, declined to give a direct answer to repeated questions on whether Russia might use nuclear weapons in Ukraine.

A former British ambassador to Ukraine, Leigh Turner, warned, “If Russia is visibly losing this war, it could be that Putin would authorize their use.”

Satan missiles originally were announced in 1964 and they have gone through various renditions since.

Over time, the early versions have been retired.