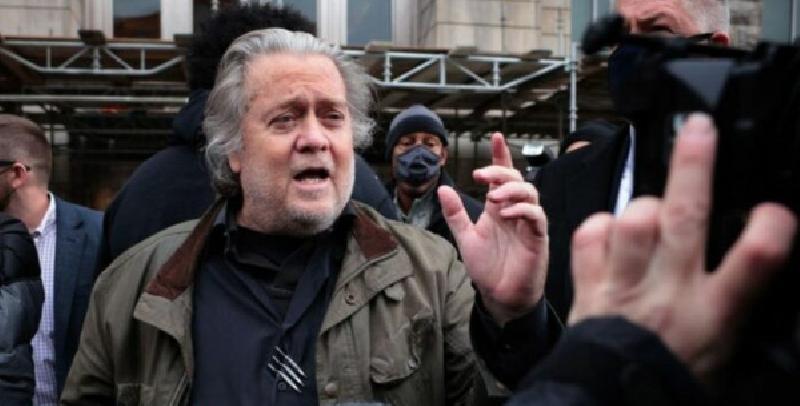 Stephen Bannon, a former adviser to President Donald Trump, is being prosecuted by the Department of Justice on claims from members of Congress that he refused to cooperate with House Speaker Nancy Pelosi’s partisan commission investigating the events of Jan. 6. at the U.S. Capitol.
So he’s demanded that all of the documents used to bring the case against him to be made public, a move being fought aggressively by DOJ officials.
But now he’s getting back up from an unlikely source, legacy media outlets.
The Hill earlier reported Bannon has opposed a protective order for discovery in the DOJ’s case against him.
That would prohibit both sides, the prosecution, and the defense, from releasing case documents to the public.
But Bannon said the public needs access to “all the facts” in order to judge “whether the U.S. Department of Justice is committed to a just result.”
A statement given to the Washington Post on the fight explained Bannon wants the judge to “allow unfettered access to and use of the documents.”
The Department of Justice has been battling to restore its reputation ever since several of its employees took part in the strategy that created the now-debunked Russia collusion conspiracy theory against President Trump. Several individuals were fired over that situation, which was called out by a government inspector general who found a long list of wrong actions in that situation.
The facts that now have emerged show that the Hillary Clinton campaign promoted the “collusion” theory with the goal of diverting Americans’ attention from her email scandal, where she posted government secrets on an unsecured, private email system. The DOJ employees, in effect, helped her.
They ran with the false claim, acquiring the Democrat-funded “Steele dossier” and going to a secret court to obtain permission to spy on individuals from the Trump campaign.
Bannon has pleaded not guilty to the contempt of Congress claims.
Now the Daily Mail has revealed that a group of legacy media outlets, including CNN, ABC, the Washington Post, the New York Times, NBC, and the parent company of the Wall Street Journal, “filed a motion to intervene as Bannon fights the government’s proposed order.”
“The order would severely limit what Bannon can do with the trove of information that the feds must share as part of the normal discovery process and have already begun handing over. According to a prior government filing, this includes more than 1,000 pages of witness testimony, grand jury material, and even emails from staff for the House Jan. 6th Committee investigating the Capitol riot,” the report said.
The press members, who largely were publicly in opposition to President Trump before and during his presidency, “argue that the government’s proposed order would violate the First Amendment – and takes on the government’s own contention that allowing Bannon to use the materials would result in pretrial publicity that could taint the jury pool,” the report said.
They argue, “Proper justification for a gag order necessarily includes a finding, in absence of its entry, that no ‘less restrictive alternatives’ can adequately prevent the perceived harm.”
The Daily Mail noted, “The filing puts the mainstream press squarely on the side of Bannon, who has in the past said the Times should be ‘ashamed and humiliated’ and attacked the media as the ‘opposition party’ – albeit on a procedural matter of mutual interest.”
Bannon said at the outset, shortly after being charged, “‘I’m telling you right now, this is going to be the misdemeanor from hell for [Attorney General] Merrick Garland.”
The DOJ said it wants to keep documents secret because it opposes Bannon’s plan to “try this case in the media.”
But Bannon suggested, during his earlier comments, that it already was political, since “Joe Biden ordered Merrick Garland to prosecute me from the White House lawn when he got off Marine One, and we’re going to go on the offense. We’re tired of playing defense. We’re going to go on the offense on this.”
via wnd

Russian Lawmaker Says Poland Next In Line For ‘De-Nazification’

Russian Lawmaker Says Poland Next In Line For ‘De-Nazification’