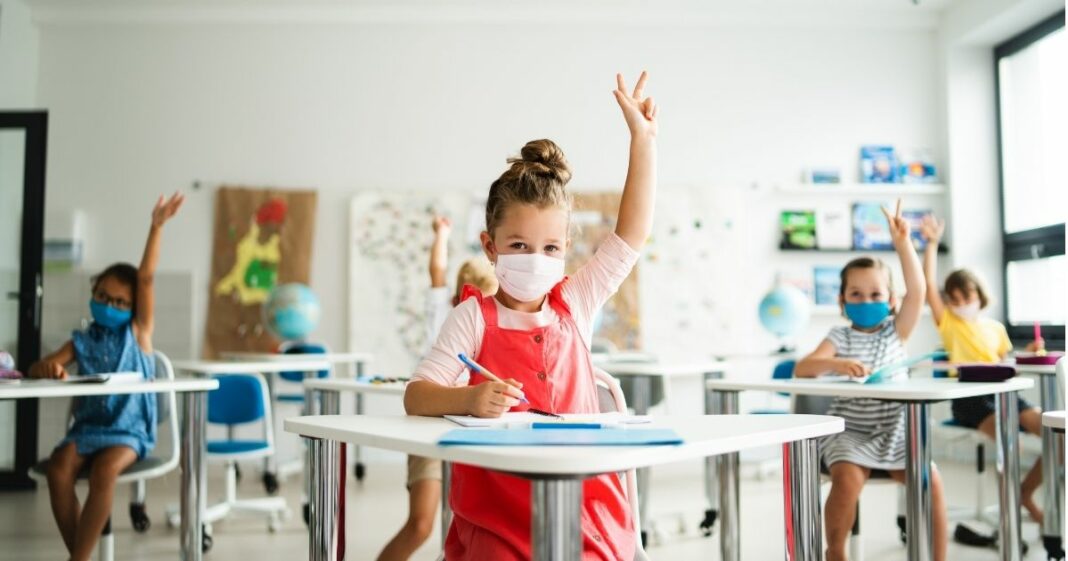 A middle school teacher in Washington state reportedly was told to remove a pro-police flag she had hanging in her classroom, while Black Lives Matter messages and pride flags are still permitted at the school, according to documents obtained by the Jason Rantz Show and KTTH-AM.
A Marysville Middle School teacher had a “thin blue line” flag hanging in her classroom to show her support for police, but the school district’s human resources department said the flag could cause “disruption in the classroom” because it is a “political symbol,” according to documents obtained by the Jason Rantz Show.
The teacher’s brother, Chris Sutherland, was formerly a police officer with the Marysville Police Department and a school resource officer when the fatal Marysville Pilchuck High School shooting happened on Oct. 24, 2014, which resulted in five deaths.
The teacher first had a thin blue line sticker on her laptop, which an assistant principal reportedly objected to over “concerns about how students, families, and community members might interpret what the image is intending to communicate, and that this interpretation may cause a disruption to the learning environment,” according to HR documents.
The initial objections were dropped, but a second assistant principal complained when the teacher hung a pro-police flag on a bulletin board in her classroom, along with photos of her brother.
“They told her that it’s controversial to have that flag up,” Sutherland told the Jason Rantz Show.
“That it makes kids and staff feel unsafe, which to me, that does not make sense at all.”
A human resources representative from the school district sent the teacher a letter of clarification indicating an assistant principal “had heard concerns from other staff members about how this political symbol might negatively impact the overall professional work environment,” the Jason Rantz Show reported.
The letter ordered the teacher to remove the flag and said failure to comply might “result in further disciplinary action.”
A district spokesperson did not clarify how the flag is political or why it allows messaging critical of police, according to the Jason Rantz Show.
The teacher has seen Black Lives Matter messaging in classrooms and the pride flag hanging in support of a teacher’s gay family member.
Schools across the country are faced with how to handle political messaging in classrooms.
A California school district took down posters in the classroom of one of its teachers that said “F*** The Police” and “F*** Amerikkka.”
Another California teacher went viral in a video where she condemned the American flag and encouraged her students to pledge allegiance to the pride flag.
The Washington teacher called the incident “the most traumatic and hostile” situation she has experienced at the school but remains “hopeful for the remainder of the school year,” she wrote in an HR document, according to the Jason Rantz Show.
But she said the order to remove the flag was part of “an agenda rather than really wanting to gain any understanding of me, who I am, or my story.”
The teacher will continue fighting to display the flag, Sutherland told the Jason Rantz Show.
She said she forgives the school but told human resources the situation has “left a lasting impression.”
The Marysville School District 25 did not immediately respond to the Daily Caller News Foundation’s request for comment.
via westernjournal