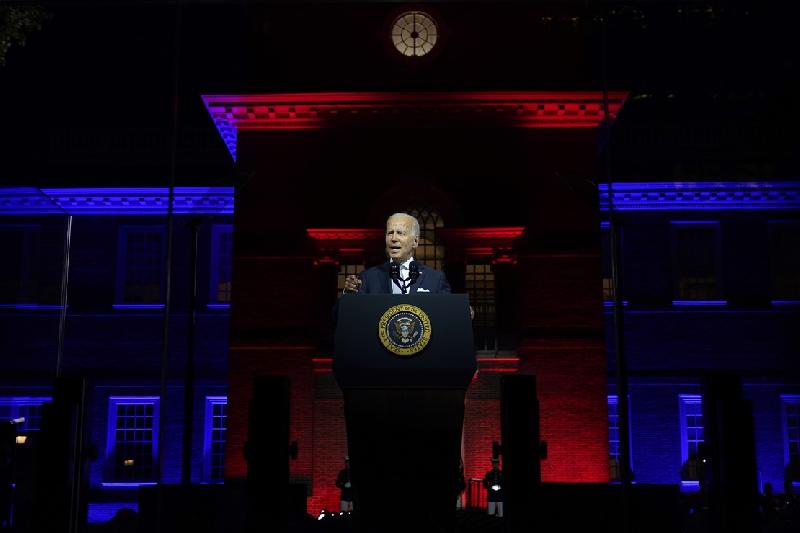 Leni Riefenstahl, Hitler’s favorite film director, was a genius at making the Nazi dictator look good on camera. She would change lighting, camera angles, and props to get the exact effect she wanted.

Hitler loved her. I wonder what Biden thinks of CNN now that their effort to make Joe Biden look less evil has been pointed out.

Go to CNN recording of Bidens speech watch at the 12:40 to 12:46 time as CNN changes the background color from red to pink. WTF?

I think this guy has a point.

.... and we have none other than CNN literally changing the colour/tones during the speech.

Someone was no doubt screaming 'omg, that looks too much like 'V for Vendetta... Chancellor Sutler'. Lose the red!https://t.co/2Ba23yMctu

In tweets and blog posts from the side of the aisle targeted in the speech the color change was spotted, pointed out to others, discussed, and basically became a whole thing. The general consensus was that CNN was “softening” the background color so it wouldn’t seem so “fascist,” as several right-leaning websites put it.

Rep. Marjorie Taylor Green (R-Ga.) can always be counted on for a good Hitler tweet.

What we all saw tonight from Biden.

I guess when President Butterbeans is frail, weak, and dementia ridden, the Hitler imagery was their attempt to make him look “tough” while he declares war on half of America as enemies of the state.

While CNN has been mum so far on the altered lighting, this explanation by Caleb Howe may not satisfy the bloodlust of MAGA forces but is an alternative to the blatantly political reason everyone believes.

MSNBC, on the other hand, looks radically different and it was that way from the get, although they obviously used the pool (CBS) feed just like CNN did.

It looks to us like they brought the colors in a range early in the live stream, probably detecting the poor coloration well before CNN. CBS never adjusted their feed online. And CNN? Well clearly they ended up going pink somehow.

Still, none of the videos we checked changed the backdrop’s angry red coloration except for CNN. Not the pool feed, not MSNBC or C-SPAN or the White House’s live stream.

I didn’t pull Fox News’s coverage but I assume they also kept Biden’s rage red motif — maybe even added some devil horns or a pitchfork, IDK.

Since virtually no mainstream media outlets are even the teeniest, tiniest bit curious about what the hell happened to CNN’s lighting, CNN will not feel compelled to dignify the bias charge with a response. After all, if it’s only Fox and a few nutty right-wing news outlets, the issue can safely be ignored from their point of view.

Much more interesting to discuss would be what possessed Biden’s handlers to stick the president of the United States in front of a backdrop Leni Riefenstahl would have applauded.

Everytime I think Biden and crew can’t be dumber they outdo themselves. Seriously who gives a speech warning people about how dangerous Republicans are to Democracy while having a background that looks like the Soviet Union and Hitler had a baby? pic.twitter.com/sukqTswI3C