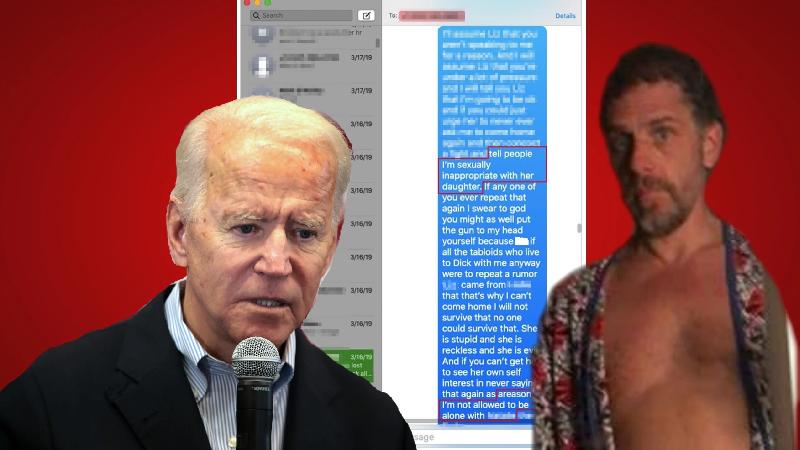 Hunter Biden sent text messages to a contact “Eva” – a person who handles payments to the Russian hookers – complaining that his account was getting hit with ‘red flags’ because of the Russian email accounts.

A 2020 senate report proves Hunter Biden made payments to hookers overseas: “Hunter Biden paid nonresident women who were nationals of Russia or other Eastern European countries,” and records note some of these transactions are linked to what “appears to be an Eastern European prostitution or human trafficking ring.”

Hunter sent these texts saying his bank account was frozen after he tried to make payments to escorts with Russian accounts.

A 2020 Senate report alleged that Hunter made payments linked to what “appears to be an Eastern European prostitution or human trafficking ring.” https://t.co/7HpniHhuBD pic.twitter.com/6bog8lZiCV

Hunter Biden spent over $30,000 on escorts, many of whom were linked to “.ru” Russian email addresses and worked with an “exclusive model agency” called UberGFE during a 3 1/2 month period between November 2018 and March 2019.

He managed to do so thanks in part to Joe Biden committing to wiring him a total of $100,000 to help pay his bills from December 2018 through January 2019.

In one instance, Joe Biden wired his son $5,000 while he was actively engaged with an UberGFE escort. In another, texts indicated Hunter Biden convinced his father to wire him $20,000 to finance his stay at a New York City drug rehabilitation program that he never checked into.

“What’s wrong with you?” Hunter told the Washington Examiner shortly after this story was published.

There is no suggestion in these messages that Joe Biden knew what his son was spending his support payments on.

The Washington Examiner obtained video of Hunter Biden in a Massachusetts cottage verbally abusing a Russian escort who was upset he was taking too long to pay her for her services.

courtesy of the Washington Examiner

“Is anything hurt on you? Anything? I was literally saying I’m sorry that it took so long to give you $10,000,” Hunter Biden said in a video sent to Eva. “Do you have any bruise? Anything? Have I ever touched you in a bad way? Ever? Have I asked you every time if I could touch you? Every time.”

“Sweetheart, look at me. You cannot talk to me that way and say things like that. Because I’m more respectful than anyone you’ve ever met. Are you OK?” he asked.

Joe Biden sent Hunter a text at 9:52 pm asking if he got the money via Cash App and Hunter didn’t respond that night.

Keep these facts in mind as you watch this video of Hunter Biden accosting an escort tied to a Russian bank acct:

Imagine the headlines if President Trump wired Don Jr. $100,000 to pay for hookers then a video of Don Jr abusing the hooker surfaced.